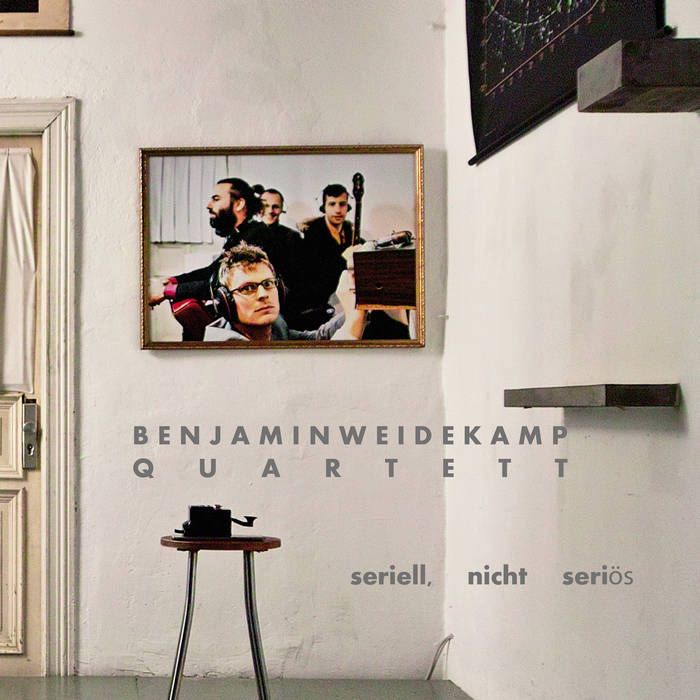 Benjamin Weidekamp is back. The creative brain behind Olaf Ton and Stereo Lisa starts up again with his quartet founded in Berlin in 2010 and a new CD. »seriell, nicht seriös« (which in English, translates to »serial, not reputable/serious«) – microtonal entertainment groove jazz based on spectral analysis and the morse code.

“I basically understand the method of operating with the morse code as a strategy and/or kind of rule that I impose on myself,” says Weidekamp. “During the compositional process these rules are varied, extended, reorganized, questioned, reinvented or completely left by the wayside to get a satisfactory or rather the desired sound.”

It is obvious that Weidekamp and his colleagues have heard of artists like Kanye West, Jay-Z and Missy Elliott and have walked away from that experience knowing a little something about beats. The band manages to tease quite a few odd and deep grooves out of the old cipher codes.

In terms of harmony, Weidekamp uses different microtonal approaches, each of them not just as a colorful add-on to the well-tempered system but as an independent cosmos of microtonal sound.
Right from the start, the opening song »Nomen est Omen« shows Weidekamp’s confident handling of the strict methods: The band members´ names do not only turn into rhythms, but also into strangely beautiful harmonies. To achieve this, Weidekamp uses the split chord technique that can be traced back to Hába where intervals in the well-tempered system are split in half with the help of a quartertone. The intervals he uses are derived from the names´ vowels and consonants which constitute a note in the chromatic scale.

In »Allegro Assai« Weidekamp splits a Schönbergian 12-tone row in this microtonal way. “The basic idea was to write a sheer endless, constantly winding line and which has an hypnotic effect thanks to its virtuosity and the musician’s physical effort to play something that is so over-the-top difficult to execute.”

In more ways than one, the drumsare at the center of the group´s dense and compact sound. Played by Weidekamp´s longtime sidekick Christian Marien, they naturally give off a whole barrage of morse code signals, but on a deeper level, also often provide the harmonic basis for the enterprise. Therein lies the secret of some pieces´ structural coherence: With the help of spectral analysis his sounds form the harmonic basis for the compositions »seriell, nicht seriös« and »Wu-Han«. The frequencies derived from the analysis are carefully rounded up or down to the next quartertone. The name »Wu-Han« comes from two china-type cymbals that Weidekamp used as material for composition.

"The piece Wu-Han was inspired by Asian art - especially Gamelan music and modern Kung-Fu films such as Tiger & Dragon, whose inherent drama and poetry were a model for me here. However, an equally great inspiration for this song and especially its overall form were the tight studio recordings from the Bebop-era, with their high density of events, improvisation over the harmonic basis of the material and finally a shortened closing theme."

Next up is »ausgerechnet Latin« (which translates into »Latin, of all things« and literally into »calculated Latin«). Benjamin Weidekamp took the title as an invitation to literally calculate the rhythm basis (the clave is derived from the morse code of the drummer’s initials) and the harmonic material (the chords and melody tones are derived from the names “Graupe/Benjamin”, the rhythm of the melody from “Ronny/Weidekamp”).

Dealing with microtonality has become common practice for Weidekamp.
“Microtonal does not necessarily mean ‘un-melodic’ or that the ‘tones lie close together’,” explains Weidekamp. “If I find a sound which I find pleasant and have it played by various instruments, it will sound beautiful! And the world that surrounds us simply is microtonal. A bird sings the way it always sings. It doesn’t know anything about well-tempered tuning.”
The way Weidekamp employs microtonality leads to listeners sometimes coming up to him to ask what was microtonal about it all. The answer is simple: Everything! The scordatura of Ronny Graupe’s 7-string guitar (two to three strings can be “out of tune” by a quartertone) as well as the sound spectrum of the title »Klangschale« that is quantified in eighth-tones.

Finally, how do four musicians who originally come from playing jazz deal with this strong limitation of stylistic devices, which Weidekamp is also writing a book about, in the improvisational parts in the end? The quartet collectively improvises the development section (in the classical, sonata-form way) to the compositions. In the process, the improvisations go all the way and become a part of the piece in their own right, without losing the connection with the original composition.
There are no soloists. The traditional distribution of roles is dissolved as part of a communal working process on a given piece. The focus is on the search for an ensemble sound, which blends the individual voices so successfully that makes it hard to distinguish singular sound sources.
The result grooves quite a lot and takes the listener on an ambitious sonic expedition. If you have heard Weidekamp’s music before, you will know that these trips never go down without a fair share of subtle humor. Just like in the title song where the drummer’s cracked Thai gong is subjected to spectral analysis, inverted and slowed down by the factor of thirty, in the process creating the harmonic basis on top of which each musician will send their name in morse code 16 times.