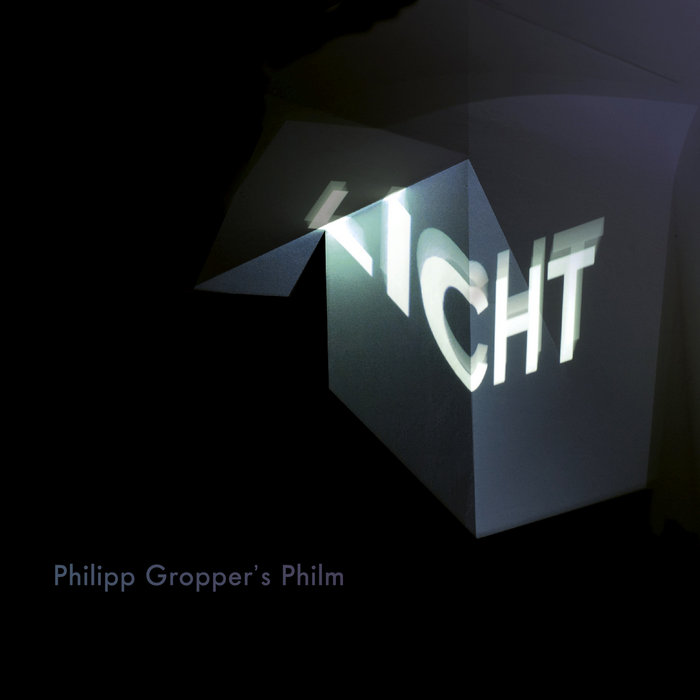 PHILIPP GROPPER’S PHILM is the third project of the „exceptionally gifted Berlin saxophone player“ (David Friedman), aside from the trio „Hyperactive Kid“ which tours worldwide and the orchestral/electronical concepted band „Gropper/Zoubek/Eldh/Schröteler“. LCHT„Light“ is Gropper’s first album in his own name.
On this very intense album it is clear that there is a strong preference for extraordinary, surprising compositions and images. The six tracks offer an insight into the very own musical world of the composer and improviser.

Licht: „A beam of light cutting through a room, seen from various perspectives, close up and from afar, travelling with it or remaining in one spot.“
Robot: „Visualizing the strange movements of a robot, as it follows its own pulse.“
Club 49: „Dedicated to a small bar in Kreuzberg. No sooner than one steps inside, one is lost.“

„Each of the tracks composed by Gropper, tell their own, individual story and – this goes without saying – it happens in a strictly abstract manner.“ (Rudi Mahall)

Concerning his approach to the classical formation of a quartet, Philipp Gropper remarks: „The longer I play music, the more clearly I perceive the impact of a group, which message it emits.
For me, this essence, which can be experienced through the transcendant quality of music, is what it is all about, and this is absolutely independent of style or instrumental and personal equipment. Sole virtuosity, flights of intellect and the tendency of our time to use softening agents bore me – what I want is directness and mysticism.
I am deeply connected to tradition and constantly try to understand and carry forth its liveliness and freshness – which could only develop in the context of its time; and thus secure the old masters their lasting impact.

Confirming this, Rudi Mahall writes, „what we have here is an obviously very successful crossover from various idols, the result of this experiment being an overwhelming, unmistakeably individual Gropper, immediately distinguishable from his colleagues“.

Last but not least, however, it’s the three sidemen – the Norwegian Håvard Wiik, piano (Atomic, Motiv, Ken Vandermark), Andreas Lang from Denmark, bass (Andromeda Mega Express Orchestra, Gunther Hampel) and Oliver Steidle, drums, Germany (Der Rote Bereich, Peter Brötzmann), who make „PHILM“ sound so convincing. The band seems to breathe as one. They give each other space and have an extraordinary sensitivity for energy and musical flow. Together they carry on the stories started by the compositions.

The album in its poetical diversity defies a hasty musical classification. It tells much more in nuances, of connections between awareness and communication, acting as a catalyst upon themselves.
For the listener, composition is not always distinguishable from improvisation. The intermingled and powerful tracks come to life through their harsh changes, remain unpredictable in their beauty and are full of suspense. Musical images come and go in the Jump Cut. The value of this music is immeasurable.