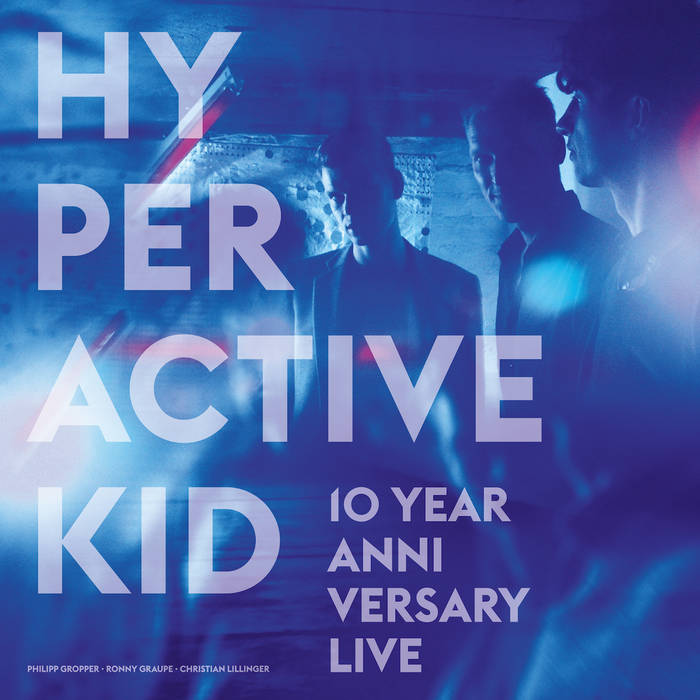 Recorded live at the legendary A-Trane Club in Berlin, this recording proposes a kind of retrospective summary of the decade long history of the Berlin-based trio, quite appropriately called Hyperactive Kid, which consists of saxophonist Philipp Gropper, guitarist Ronny Graupe and drummer Christian Lillinger. With four albums to their credit and a reputation of „never a dull moment“ live performances the trio is an integral part of the avant-garde Berlin scene, which, similar to other European Capitals, seems to be rapidly developing since the turn of the Millennium, creating a Renaissance of ambitious European Jazz and Improvised Music after at least a couple of decades of relative stagnation. In the past ten years, Hyperactive Kid has performed countless concerts on five continents and has managed to form a sound and musical conception very much their own. The album presents five original compositions, three of which were composed by Gropper, one by Graupe and the remaining one credited to all trio members.

As usual with today’s young generation of Jazz musicians, each of the trio members is active separately in other ensembles. Next to numerous duties as sidemen they each lead their own groups as well: Gropper is the head of PHILM as well as TAU, Graupe’s trio is called SPOOM, and Lillinger leads GRUND, a septet. This hectic activity seems to be a common characteristic of most young European musicians, who are apparently blessed with incredible amounts of creativity and talent, way to extensive to be contained within one setting.

The music of Hyperactive Kid is a highly energetic and emotional exchange of ideas and moods, bursting with spontaneity but also „well organized“ in a manner which makes it accessible to open-minded listeners. Freedom and cooperative discipline are well balanced and produce a stream of engaging and stimulating music, which keeps the listeners on their toes.

European Jazz still manages to reinvent itself and push its boundaries ever further away from the stale mainstream tradition. The musicians of this trio belong to a generation to whom much of the credit of revitalizing the European scene is due. Hyperactive Kid managed to amalgamate many of the different “spirits” which were in the air ten years ago into a very intelligent and extremely rich music. By diligently continuing their work, staying together and choosing to continually go deeper, they have become somewhat iconic for this generation and a model of work and sonic coherence. Now that they have fully come into their own and continue to fearlessly explore the Jazz aesthetic, often against all odds, shunning from fads and fashions of contemporary non-culture, we as listeners are able to see our beloved music alive and kicking, going through another stage of its evolution. Gropper, Graupe, Lillinger and their colleagues all over Europe are our hope for the survival of what we consider true Culture, even if we need to enjoy it in the catacombs rather than in the amphitheaters. Come to think of it, the program on hand in the catacombs has always been more interesting, anyway.